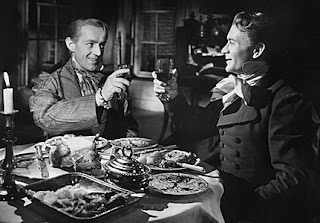 Delores over at mybabyjohn.blogspot.com (the feathered nest) has prompted this post; for which I thank her.

When Pip moved into his Barnard's Inn rooms with Herbert Pocket, it always reminds me of my late father and his move from Sussex to London.

Nowadays anyone moving into unfurnished accommodation would probably run straight to Ikea, but in his day things were quite different.

Father's first job was in The City of London working for Morley's; a major clothing manufacturer of the twixt-war era. Being a sensible person he took rooms in nearby Milk Street; a short walk from his office.

In the absence of Ikea or Habitat, my grandfather instructed his village carpenter to make a table with 4 chairs and 2 carvers, a wardrobe, a desk, and a drinks cabinet sideboard. All was made in solid limed natural oak, and other than a bed (which I presume was already there) it was all he needed to furnish his few small rooms.

This furniture that his father had offered him stayed with him throughout his life, and I suspect he treasured them more than any other more valuable or interesting pieces. Unfortunately when they became available I had already furnished my own home, so, eventually, most of the items became surplus to requirements and were sold for a pittance. However, I did manage to save the small compact writing desk which I now myself treasure (no picture I'm afraid, it's in England).

I shall pass it on to my oldest son, with strict instructions that he will, in turn, do likewise.
Posted by Cro Magnon at 05:55