The World's Most Spoilt Brat? 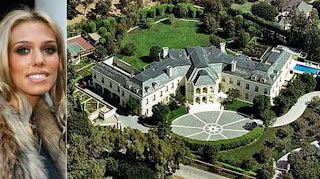 Queen of the Bimbo-Chavs (and daddy's little darling), 22 year old Petra Ecclestone has just bought herself a gaff in California. Not content with just her £56 Million pad in London's Chelsea, she has now purchased this £52 Million ex-Spelling home in Los Angeles. What on earth will she do with it?

It seems that Ms Ecclestone can only find pleasure in life IF it costs a bloody fortune. Even her recent wedding in Italy cost £5 Million (mine, in Gibraltar, cost NOTHING).

For some bizarre reason I was thinking about her this morning, as I took Monty and his friend Bok for an early morning walk. It was about 7.15 am, there was a light mist lying low over the fields and I had the whole silent world to myself. The pleasure I got in simply following the two dogs as they frolicked in a field of clover is indescribable..... and, of course, it too cost NOTHING.

Don't get me wrong; I'm not in the slightest bit jealous of Ms Ecclestone, as far as I can see, she has nothing for anyone to be jealous about! However, had she spent a few millions building a new wing onto a hospital, then, yes, I would be jealous. I just think that she must have missed out on so much in life.
Posted by Cro Magnon at 05:56