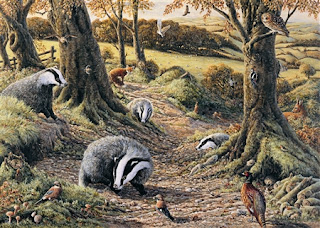 Badgers receive seriously poor press. Often maligned by the agricultural lobby, they are the subject of mass culling in the face of possible bovine disease.

Personally I like knowing that there are Badgers about. It's a sign that Mother Nature is doing her job.

Yesterday morning as I took Monty for his first walk of the day, he suddenly stopped in his tracks and began to growl. As I continued up the track behind him, his concern soon became obvious. A Badger was by the side of the track halfway up a small bank, and looked to be in extreme distress. It appeared that he had been run-over, and had tried to climb the bank; without avail. The soil around him was bare from his frenzied scratching.

I hurried home to fetch my 'priest' (a small .22 hand gun), and returned to end his obvious pain. I took no delight in my action.

Once he was dead I noticed that a wire was restricting his rolling down to the bottom of the bank. He had not been run-over, but trapped in a snare, and the snare itself was attached to a heavy metal spike in the field above.

Farmers everywhere have their reasons for reducing the population of certain destructive animals, and I am certainly not going to rebuke them for their actions. But I will never stand by and let an animal suffer.

Reluctantly I shall say nothing, and will have to bite very hard on my tongue. But I am still very shocked, upset, and saddened by the whole affair.
Posted by Cro Magnon at 07:17