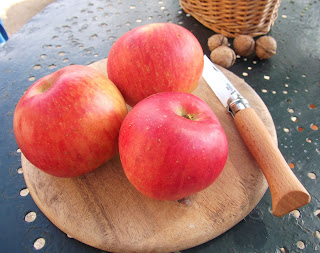 They look more like a Cox than a Bramley (other than their size), but they really do come from a genuine Bramley tree that I imported from England many years ago.
The reason for their colour is, I presume, extra sunshine. This creates a dessert apple that is almost as good as any other in flavour. However, it does remain a little less sweet than most; which suits me fine.
I should add, for those of you in far flung places, that a Bramley is a wonderful, but usually quite sharp, cooking apple, and, when grown in its native England, is all GREEN (other than an occasional slight blush). But here they regularly adopt red and yellow stripes, redolent of a Cox. That little extra heat and sunshine gives them a boost, and they also seem to gain in flavour.

We've filled about four large boxes with 'perfect' fruits for the winter, and Lady M has frozen several bags-full of purée. The only down-side is that beneath the huge tree it's a foot deep in rotting windfalls. It's that old problem of 'WASTE' again.