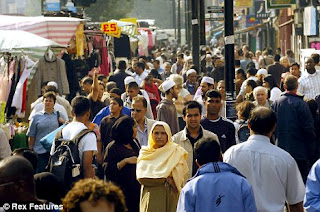 John Cleese (of Monty Python fame) has stated that if he had to live in England, he would choose Bath over London, as Bath is one of the few English towns that still appears to be English. He's not being racist; he just wants England to continue to look like England.

Social experiment is always dangerous; whereas natural development usually isn't. The great problem with the Socialist's recent 'door-wide-open' policy, is not that England has had a huge sudden massive influx of foreigners, but that the majority of these immigrants have absolutely no intention to assimilate. They are there for the money and life-style; earned or handed-out (usually the latter).

Oh, and just in case you were wondering why I'd posted the above picture.... It's just an ordinary street in London; the sort where John Cleese doesn't want to live.

p.s. Poor Mr Cleese has recently divorced his wife Ms Alyce Faye Eichelburger. This charming woman, who he rescued from life in a council flat, has recently received a cash settlement of £12 million, plus an annual payment of £600,000 for the next 7 years. Not only was Cleese shocked by the court order; but so was the whole of England. Cleese later said "I think I got off lightly; just imagine what I'd have had to pay Alyce, had she contributed anything to the relationship".

Cleese also said that if he and Ms Eichelburger were both to die tomorrow, HER children would end up much richer than HIS..... Divorce is a wonderful thing in England; as long as you're a woman.

Mr Cleese is thinking of settling in Australia.
Posted by Cro Magnon at 06:20