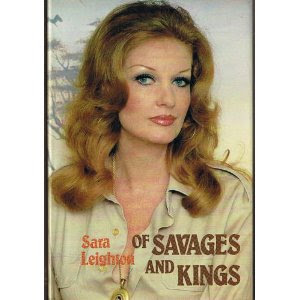 When I was living in London I met some really interesting people; as one does . Over the next two sundays I'm going to highlight a couple of them. Neither is particularly well known, so this is not a 'name dropping' exercise, but both were painters and both left their indelible marks.

I can't remember quite how I met portrait painter/writer Ms Leighton, other than we were close neighbours in Chelsea. Sara (quite naturally dwarling) had a beautiful house and studio in fashionable Glebe Place, whilst the penniless Cro lived in an oversized broom cupboard in Bramerton Street; the next street up.

It was probably in 1965 or 6 when, completely out of the blue, she asked me if I would go to Archie Nathan's (the London theatrical costumier) to pick up a suit of armour. She was painting the portrait of a well-known actress (can't remember which one), who was playing St Joan in The West End, and she needed the armour 'pronto'.

Sara wasn't the sort of woman to whom one would refuse a request. She was beautiful and statuesque, and her Maureen O'Hara style red hair demanded to be taken very seriously!

The suit of armour was waiting for me when I got to Nathan's. I stuffed it into the taxi, and a short while later delivered it to her studio where I spent another hour or so setting it up in the right pose; complete with waving tricolore flag.

By way of a thank you, Sara invited me to dinner at a local restaurant (235; remember it?). She arrived just a short while after me, wearing a pale beige, detective style, trench coat. When I asked if I could take it for her, I was a little surprised when she replied that I'd better not, as she had absolutely nothing on underneath. Ahem...

The last I heard of Sara was that she'd bought some huge old monastry in Tuscany that she was running as an artists colony/hotel. I suppose she'd be in her 70's now (very indescreet Cro!) and is no doubt still causing a rumpus somewhere in Italy. She was quite a lass.
Posted by Cro Magnon at 05:52