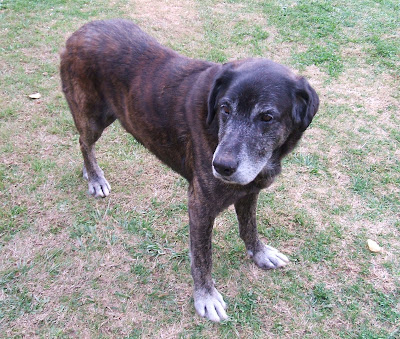 Let me introduce you to Robbie Baskerville. Robbie's a big boy, and in his hey-day looked as if he'd have your arm off just for a light morning snack. Nowadays he's getting old; he's greying around the muzzle, his bones ache, and the younger whipper-snapper local dogs like to taunt him.

He belongs to my friend and neighbour José, and he's the boss of three farm dogs; the other two being Jimbo (who has a broken ear), and Robbie's young and inseperable side-kick; the hooligan Duke.

Robbie is very independent, he walks about a mile to see me at least once a day. He tidies up all the scraps, does a couple of tours around the garden, then pisses on anything previously un-pissed-upon.

I've known Robbie all his life, and we have a sort of mutual understanding about dog/human relationships. He looks (or did look) totally ferocious, but is a complete softy. I don't suppose he's got many more years (or even months) in him, so I'm presenting him to you before it's too late.

A wonderful dog is our Robbie; a real local character and a really great friend.