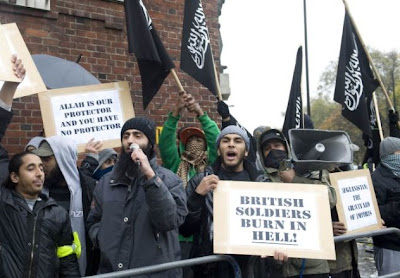 Have you noticed that in most protests the banners are all made by the same person. Some lone fanatic who, probably, is the only one who can spell.

The above picture from Thursday's Rememberance Day in London is a good example. These nice young people had just been showing collective gratitude to their country of adoption, by waving at the police, and keeping themselves warm over flowery open fires. Their amusing placards, all obviously of the same origin.

During my student days I went up to London to demonstrate about something that seemed important at the time. When we stepped out of the coach (where the march was due to begin) there was a man standing by the steps with a huge pile of banners. He handed one to me which was large and red. I looked at it carefully, and it had absolutely nothing at all to do with the reason for my protest; it was simply a standard Communist Party rant about smashing government. I returned it to the man at once, but was horrified to see so many others blindly walking off with their handed-out banners held aloft.

Our protest had been hijacked by a political agenda, and I wanted no more to do with it. Lady Magnon and I spent the rest of the day wandering in galleries, whilst, sadly, the sheep went off and (placards in hand) bleated loudly.