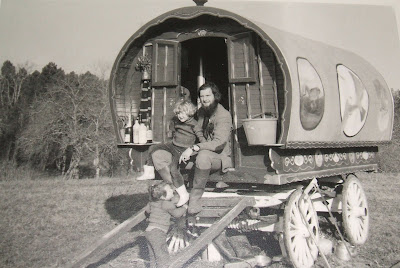 Who amongst us hasn't dreamed of setting off in a Gypsy Caravan, and leaving all the stress of civilisation behind.

Not too long after we'd moved to France (around 1975), we were visited by a young London couple who'd done just that. They parked their wagon behind our barn (above), put the horse to graze in our field, and settled down to a couple of months rest chez Cro.

Their Welsh Cob, Joe, had been a London Rag-n-Bone man's horse, and pulled the wagon for just 15 kms each day. As such, they had taken 3 months to travel from the north coast of France to where we live, and later took another 3 months to travel down to the south coast where they eventually sold the whole horse/wagon caboodle, and returned to Blighty where, I believe, they wrote the obligatory book.

At the time we had two small children (above), and we were all perfectly happy living where we did, but as I sat in the doorway of that tiny caravan, I too dreamed of that open road.

The owners of the wagon were both inner-city London teachers (she was Weggie-Benn's niece), and were taking a sabatical for essential recuperation. It must have been very hard settling back into work again after such a spectacular year away.