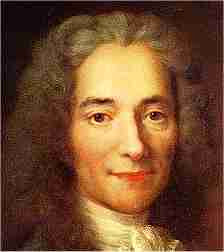 Maybe I'm venturing dangerously close to the realm of 'morality', but I've always thought that Voltaire was absolutely right when he famously said "I do not agree with what you have to say, but I'll defend to the death your right to say it!".

Nowadays I'm not so sure. When 'Free Speech' is abused by a radical minority in order to corrupt a gullible and causeless public, maybe it's time to say 'No'.
The great problem is where one draws the line between what is acceptable and what isn't. I certainly wouldn't trust it to politicians or the judiciary, so who could make such decisions?
Perhaps 'public taste' should be the final arbiter, although how this would be implimented; I have no idea! What I do know, however, is that the 'public' is becoming increasingly angry about too much so-called 'Freedom-of-Speech', and if nothing is changed, that anger may well spill out onto the streets.
Take To The Barricades Citizens; but maybe not just yet.
Posted by Cro Magnon at 05:34