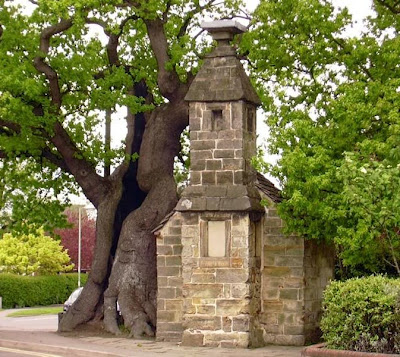 As an ex-pat I tend to meet with people who have travelled extensively in their lives, and one of the questions I often ask is 'Where do you call home?'

I suppose Mrs Magnon is a good example. She was very nearly born in Katmandu (but a sudden outbreak of Yellow Fever forced her mother return to England; even though she herself was Swedish). She then went to Moscow, then to Washington, then to Caracas, then to Puerto Rico (I may have the order wrong). And when her father eventually retired, she settled in Sussex, S E England. So where does she call 'home'?

The first 14 years of MY life were spent in a small Surrey village, just south of London, called Lingfield. A pretty village with a central duck pond, a liberal sprinkling of beautiful old houses, and an atmosphere of relaxed gentility. Life was good, everyone knew each other, and we all felt safe in our pleasant rural environment. In the centre of the village was/is an ancient Oak tree, and the village 'lock-up' (built around 1770) which is known as 'The Cage'. The village spreads outwards from this point.

There is no question that I still think of Lingfield as my HOME. It's where my parents were married, where my father ran his first business, and where most of my friends lived (even though I was away at school for long periods). Lingfield was, without doubt, very much a major part of my life.

I've been back a couple of times in the last ten years, and sadly it's no longer the same. It's proximity to Gatwick Airport (the world's second busiest, after Heathrow) means that the constant noise of aircraft has ruined the peace that I remember from my childhood. In better circumstances I would liked to have returned to my village for my retirement, but now there's no chance. The noise is simply too all-invasive; even if the village itself is still stunningly beautiful.