Freddie. But, then again, not. 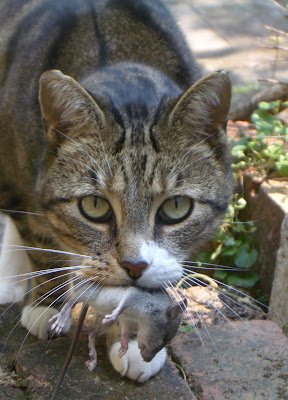 The picture above is NOT of our cat, Freddie, but most tabby's look pretty much the same, and apart from the white patches, this could almost be him.

Freddie, like most cats, just loves the cut and thrust of a night-time mouse-safari. Unfortunately he then brings his prey up into our bedroom; alive, half-alive, or dead.

Usually it's a matter of ME having to get up, and whack the poor little thing (the mouse) to make sure it's dead, before I either launch it out of the Velux window, or take it outside. This can happen SEVERAL times a night.

Of course, a cat is paid (in food and lap-time) to rid a house, or surrounding area, of mice, and in the countryside there is no shortage. So I cannot scold him; he's simply doing his job. It's just that I wish he'd leave his catch outside!

Mrs Magnon has been away in Australia since February the 10th (and will not return until the 24th), and I'm almost disturbed to report that Freddie has not brought one single mouse up to the bedroom since she's been away. Does this mean he thinks of HER as the senior human, and not ME? And all these mice he brings in as offerings are for HER?

I'll be having some serious words with our Freddie; and let him know who's the real boss around here!