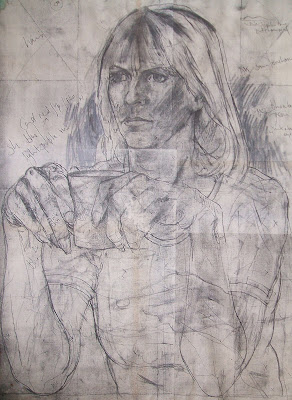 Very rarely do I accept portrait commissions. The above was an exception. The woman was the wife of a very good friend in Shropshire; she was pure Scouse, and had an exceptionally strong personality. She also had the type of features that usually make for an interesting picture. The drawing above was the very first preparatory sketch, and she proved to be a most difficult sitter.

In later drawings the mug became a Willow Patterned cup and saucer, and her hands became covered in white stitched gloves. I delivered the finished job after about four months.

My friend loved the painting; his wife didn't. It wasn't how she saw herself, although she liked it as a picture of 'someone else'. In my defence, I should add that the finished job was a very close likeness of her. I'd used a palette that was particularly rich, in dark greens, umbers, ochres, and reds. Rather Florentine/Pre-Raphaelite.

The painting was given top-spot in their drawing room, and (forgive my arrogance) was much admired by their visitors.

Two years later the painting was stolen, the above is all that's left. If anyone has any info', do let me know.