Monday is my 'adverts' day. Usually a bunch of supermarket, shoe-shop, garden centre, hardware store, etc, advertising bumf, turns-up in my mail box; most of which gets instantly 'sent to ground'. 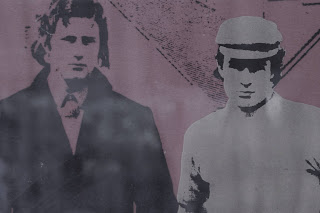 However, on Monday an exceptionally large package also arrived; I was fascinated but confused. It turned out to be from my good friend Tony, in England, who had previously lived just a few hundred metres away from me before leaving unexpectedly. We were at college together (above Tony right, me left)

The package included several 'collages' that he now makes. Having designed some of Dubai's most iconic buildings, as well as part of its infamous airport, he now confines himself to the art of 'collage' back in Surrey, two of which I've already framed. 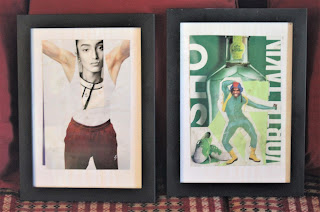 Sadly, Tony suffers from MS, but this hasn't quelled his desire to 'create', and he now spends his days snipping and pasting. In a recent letter he compared his work in Dubai to what he does today; describing the latter as being 'just as fulfilling'. That pleases me enormously.

I love keeping in contact with old friends. We all know that our time here is limited, and we should make the most of it. Tony and I have a lot in common. We have very similar educational and family backgrounds; and we think in a similar way. Our interests are much the same, and we both refuse to suffer fools gladly. I was pleased to read that he still has an acerbic tongue for those who wronged him.

I don't think he reads this page, but I send him my thanks, and very best wishes. We need more Tonys in the world.