After my late Father-in-Law left his initial FO posting to the Embassy in Ankara, he was sent to our fledgling Consulate in Kathmandu, Nepal.

His immediate remit was to create ties with Nepal's Royal Family and leading politicians.

As in so many consulates around the world, work mostly consisted of getting wayward Brits out of prison, getting them medical attention, or loaning them money to return home. There wasn't a lot more to do.

Lady Magnon should have been born in Kathmandu, but a sudden outbreak of either Cholera or Yellow Fever (not sure which) forced her mother to return to England, and she was eventually born in 'leafy Surrey' (as was I). 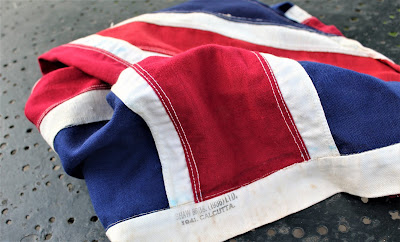 After four years, when my Father-in-Law handed over the reins to the new incoming Consul, he took with him his small Union Flag, above, made by Shaw Bros of Calcutta in 1941. It's not a particularly old flag, nor is it valuable, but it's a highly prized memento. It was this flag (his own), which was raised over the consulate during his time there.

After Kathmandu he then went on to Moscow with all the difficulties that that entailed. A very different scene to that of Nepal. The future Lady Magnon spent her first four years in Moscow.

My own family owned a particularly nice Union Flag, that had been passed down through many generations. It was bigger, and much older than the one above, and was also a very prized possession.

It would have been used by family members to celebrate the end of two world wars, as well as during the reigns of Queen Victoria, Edward VII, George V, Edward VIII (briefly), George VI, and our present Queen Elizabeth II. Sadly it was loaned to someone and not returned. I would liked to have flown it to welcome King Charles III (if I'm still around), and pass it on, but that will not now happen.

I would never, ever, loan the one above to anyone; in fact I might even frame it. If that one was stolen, we would be even less happy than we are about losing my own bigger family one!