Firstly I must stipulate that I am very pro-insulation. I spent many happy hours super-insulating our barn, and I can assure you that it pays!
However, I am very against these 'Insulate Britain' protestors who close motorways, and keep policemen from far more important work. The UK's police are not paid to stand around in groups wearing uniforms; they are paid to keep the peace, solve crime, and keep law-abiding citizens safe from idiots who glue themselves to motorways.
One can but wonder if the police are not being massively over-funded. If they can afford to pay dozens of cops to stand about and simply watch protestors as they disrupt daily life, then they should have their funding CUT. They should get on with what they'd paid to do, or maybe find another job. Below is a classic example. 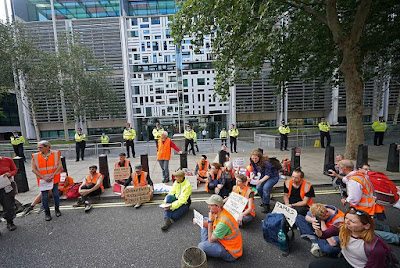 Personally I think it would have been far better for the planet (and their PR image) if these folk spent their train/bus fares on a few rolls of Rock Wool, and offered to insulate the homes of some OAP's, free of charge.
If they did that, I might have some respect for them.
Posted by Cro Magnon at 04:42