For the past few nights, I have slept UNDER the duvet rather than ON TOP of it. After several months, this was quite a novelty. I've also noticed that the butter in the butter-dish is now no longer semi-melting away; but just perfect for spreading. Change is certainly in the air.
We have still managed to swim most days, but with the water temperature now below 20 C, and not likely to rise, we are closing down earlier than usual.
We both love swimming, and do so as often as possible; in hot weather several times a day, it's the only way to cool down. My last swim was two days ago in 19C water, and was very brief.
It's a seriously depressing activity, closing the pool, just as opening it in late May is exhilarating. Seeing its Winter cover of black plastic back in place is as bad as it gets. There's a lot to remember when one closes a pool, the cleaning and chemical process takes at least 24 hrs; and it always makes us feel 'glum'. Nothing else gets 'put away' for Winter in quite the same manner.
The water may look appealing in the photo below (that I took yesterday), but it's far too cold. 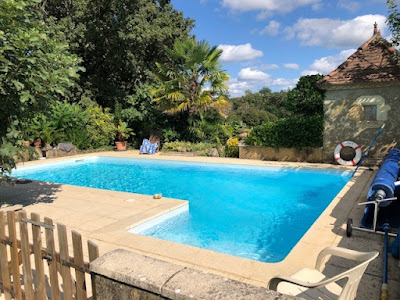 We have considered subscribing to some Country Club in order to use a heated pool, but frankly I'm not sure if it could ever replace the tranquillity of our own. The sea at Brighton, when I last looked, was at 16 C, which is totally out of the question; I think anyone swimming in that would need several flasks of hot Tea upon their exit. Certain people in Brighton swim every day of the year (without wet-suits), but they are NUTS.
It's possible that we may grab a few short 'Weekend Breaks' to warmer, more exotic, locations, where swimming would be very high on our list of priorities; but otherwise I expect we'll be spending Winter drinking Horlicks, and listening to Mrs Dale's Diary on The BBC's Home Service; whilst dreaming of opening-up again in May 2022.
Posted by Cro Magnon at 04:24