I was recently looking at some film of the 1970's phenomenon known as 'Northern Soul'.  I had left the UK in 1972, so had totally missed-out on this trend of both dress and dance. I expect the London 'Punk' movement of the same era also helped thwart its travel south.
The first thing one notices in all Northern dance film from this era are the men's trousers, which were a tad short, extremely baggy, and probably made at home. They also wore figure-hugging T shirts and Jumpers that were adorned with round badges!
This picture (below) shows several young men wearing such trousers. These were not 'flares'; they were quite different. 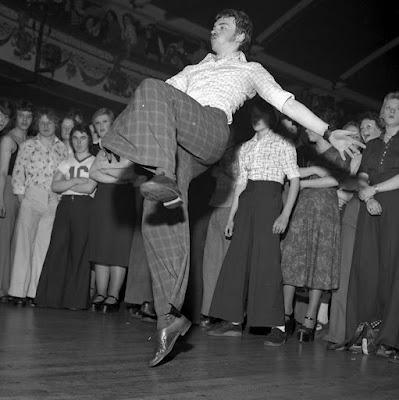 Back in the 1920's, such trousers had also been popular. Known as 'Oxford Bags' they were particularly popular with the upper class 'bright young things' of the Mayfair party circuit.
This gentleman (below) is wearing a particularly extreme version of the fashion, and obviously causing much amusement. 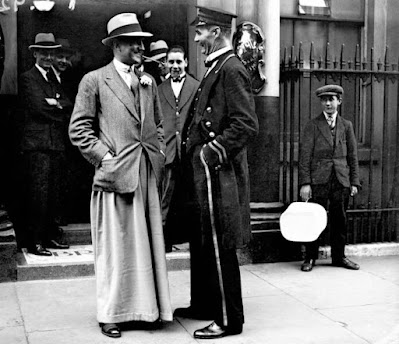 So my today's award goes to the wearers of Oxford Bags, both in the 1920's and the 1970's. Not really my cup of tea, but worthy of recognition.
p.s. Previous Style Awards can be viewed by typing 'Cro's Style Awards' into the search strip, top left.
Posted by Cro Magnon at 04:20