It wasn't that long ago (July 1st) that these same people were digging up our lawn and making an awful mess, now they're back again and making even more mess, deeper holes, and they've pretty much blocked our exit. They arrived with three big CAT diggers, four workmen, two fat controllers, and one boss of bosses with clipboard.
When they restart work on Monday we will have our access totally closed, and we shall have to drive over open fields in order to leave home. 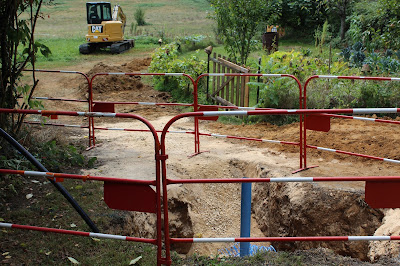 One good thing this time is that they seem to be taking more care over how they leave things. They are also quite happy to do a few things that I request, whilst their big machines are here.
On Thursday evening they stopped work early because they'd found a large Asian Hornet's nest amongst the fencing at Haddock's, so they phoned the village Hornet killer, and he sprayed them. We also asked him to deal with a Wasp's nest amongst the stones at the rear of the house, which he did. Two birds; one stone.
Such work is occasionally essential, so we don't moan about them being here. I just hope they won't leave too much mess. Poor Haddock's looks very forlorn.
Posted by Cro Magnon at 04:24