Another Shot to the Foot.

He's even beginning to look like Napoleon.
One really has to wonder how much more this mini despot can bungle, before the people of France throw him out. 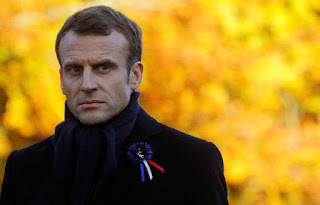 The latest result of his hostility towards the British, has cost him (France) dearly. In fact to the extent of between £30 and 60 Billion.
His offer to build a fleet of old-fashioned Diesel powered Submarines for Australia has been scuppered, and the Aussies will now buy a more advanced fleet of Nuclear Powered Subs made by a consortium of American and British makers. Macron is FURIOUS.
So unhappy in fact, is he, that after stamping his feet he has withdrawn his ambassadors to the USA and Oz. They must be quivering.
I repeat what I've said several times before. If Macron had worked WITH the UK rather than AGAINST her after Brexit, he might have been offered some minor role in the production of the new Subs. As it is, he's been left behind at his desk in Paris, issuing nowt but hot air.
One can but wonder what he will do next to ruin France's economy.
Posted by Cro Magnon at 04:26