I bought this small embroidered 'cushion' from amongst the few small items of an elderly lady's boot sale stall. She had made it when she was small, had used it all her life, then told me that she had no further use for it.
In the country it's traditional to hang messages on the front door saying where one is; this one simply said she was in the garden.
Its naiveté is charming. A short message, a few flowers, and a butterfly; none of which is particularly well executed. 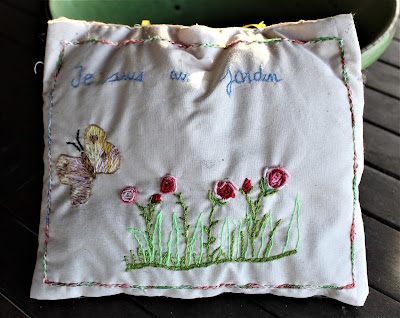 Children no longer make such things. They no longer embroider 'samplers', or messages such as the above. Boys no longer make pipe racks for their fathers in woodwork classes. Such things are from a bygone age.
When I bought the above (for a few centimes) the elderly lady looked quite sad. It was as if part of her life had ended. I told her that I would look after it, and use it when required. In fact it hangs by our fireplace in the sitting room. Our visitors pass Haddock's before getting to the house, so they would see me if I was there; making its use unnecessary.
Every time I look at it, I'm reminded of her kind wrinkled face, her traditional widow's weeds, and her natural warmth and charm. I suspect she'd been 'selling-up' in preparation for her next great adventure.
Posted by Cro Magnon at 04:28