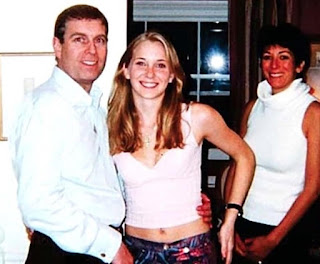 It rumbles on. Has he been served with papers? Or, has he not? Will he co-operate with the US courts? Or, will he not?

I'm no fan of Prince Andrew (nor of his ex wife). To me he is a totally irrelevant part of The Royal Family, I simply ignore him.

However, 'Randy Andy' is rarely out of the press these days, due to some fleeting sexual relationship he may, or may not, have had with some 17 year old American girl, called Virginia Roberts. Such casual 'flings' are normally no big deal; even in regal circles. Take Princess Diana for example, she had seven 'lovers' during her marriage, and no-one even mentions it!

I've tried to read as much as possible about this bizarre case, and I can only base my conclusions on what info' is out there; court papers, Wiki, etc. Most of us rather like the idea of Andrew ending-up in 'the slammer', but the evidence simply isn't there. I'm not even sure exactly what he's supposed to have done wrong!

As far as I understand Andrew and Roberts met in London through Ghislaine Maxwell. They danced together at some nightclub, then having returned to Maxwell's Mayfair home, and according to Roberts herself, she was 'asked' by Maxwell to 'do for him what you do for Jefferey Epstein'. And she possibly did as requested; although Andrew denies it. She could always have refused; but she does look very happy in the photo above.

At 17 years old, coming on to a 'Prince of the Realm' is no crime in the UK. Power hungry young women do this all the time with aristos, wealthy celebs, footballers, etc. As long as they are over 16, there is no wrongdoing on either side unless coercion was involved; which doesn't sound to be the case with Andrew. If anything, it sounds as if any coercion came directly from Ghislaine Maxwell. If Roberts had seduced Andrew in the USA aged just 17, that would be a different matter.

Of course, one doesn't expect The Queen's son to be cavorting with members of the late Epstein's hareem, but at the same time he was single and open for a bit of (sexual) fun, which doesn't represent any crime. On the other hand, putting himself into a position where he could be either blackmailed or sued shows his naiveté.

It's not always easy trying to analyse what's going on in such cases, but there is information out there. Please don't think I'm offering support to Prince Andrew; because I'm not. Nor am I offering support to Roberts. I understand she has already been handsomely compensated by Epstein in 2009 (said to be several millions), and has received yet more from Ms Maxwell, for 'defamation', in 2015. She certainly likes the idea of receiving lots of money for her previous 'services', and no doubt there'll soon be a book and a film.

Lawyers, over The Pond, are seeing nothing but Dollar Bills, and I hope more than anything else, that they are thwarted.

Maybe when Anne Sacoolas (who killed Harry Dunn in the UK two years ago) is handed over to the UK authorities, the UK/US authorities might start talking about Andrew.

Killing someone is generally seen as more serious in the UK, than having a night's rumpy-pumpy.

I repeat; I'm on nobody's side in this debacle. Just trying to look at the hard facts. It's possible you may view those facts entirely differently.