If you want to see why the EU is SO ANGRY with the Brits, just look at the chart below. The vaccine developed in Oxford by Prof Sarah Gilbert and Prof Andrew Pollard, is by far the world's most popular, and as far as I believe; effective!
The Vaccine they tried so hard to rubbish (Macron called it 'Quasi-ineffective'), is the most popular word-wide, and even the EU folk themselves are desperate to get hold of more. They even took A-Z to court over it; and LOST.
As I have said previously; far better that the EU works WITH the UK, rather than AGAINST her, otherwise a lot of egg will be found on a lot of faces; and egg tends to stick! 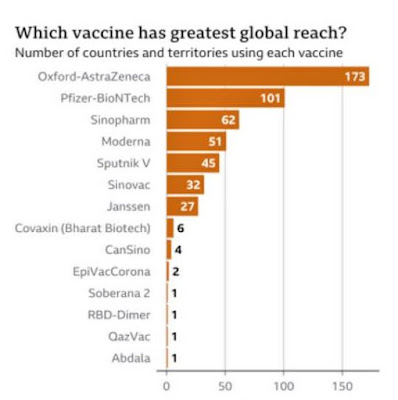