The first proper parties I attended were in London in the mid-60's. They were often 'themed'; the most popular being 'Surf Parties', where we all wore surfing gear, carried surf boards, and listened to The Beach Boys. Even in Winter!
Then, predictably, came Art College parties. Lewd, hormonal affairs, where copious amounts of hair was let down. 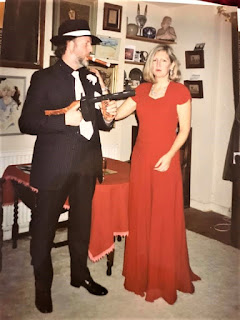 Later, in the adult world, parties were usually linked to events. Birthdays, New Year, Celebrations of all sorts. These were probably amongst the best. Here are a youthful couple at my Brighton home (where did that picture suddenly appear from?), about to go to a Gangsters and Molls party. I had made the cardboard Tommy Gun and Cigar specially for the occasion. I think Lady M had mistaken our invitation for a Buck House Garden Party.
My people used to hold good parties. Father being a 'pillar of society', was a very popular man, and his guest list usually involved all the good and the great from the immediate area. Black Sobranie cigarettes were offered (but rarely smoked), 'nibbles' were pierced by tooth-picks and handed around, and alcohol flowed freely. These gatherings often became lively, but I don't recall any drunkenness.
Here in France we have held some memorable parties, one or two of which are still recalled by attendees today; my 50th being a case in point where we roasted a whole Lamb, and fed a cast of thousands (probably about 100). Sadly those days have gone. Real characters are no longer around, and it just ain't the same.
We still talk of holding just one more extravaganza, but we would need Kimbo to be here to help, and, thanks to Matron Merkel & Co, I fear that is now out of the question. We shall probably hold a good bash in Brighton over Christmas (if we go); at least over there, there's never a shortage of interesting guests to chose from.
Posted by Cro Magnon at 04:22