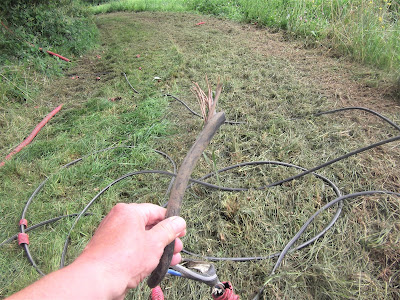 It was like Piccadilly Circus here yesterday. Firstly the man who mows the footpaths, mowed a new neighbour's temporary electrical connection behind our house. His cable, which had been lying on the surface of the path for almost a year (not recommended), was half hidden by the long grass, and the tractor driver drove right over it; tearing the cable from the electrical box connection, and shredding it.

Thank goodness the cable was torn from the connecting box before he chewed it up. He might not be with us now had he mowed from the other direction. I had told the man, who's connection it is, that it would have been better to put the cable up on the bank where it could do no harm, but advice can only be given; not enforced. Hopefully he'll listen next time.

They managed to have the power re-established before evening, so all is now well. And, yes, he's now put the cable where I had originally suggested.

Then I found our nice Water Board man in the paddock, leaning over some buried stopcock, which was issuing forth water. He explained that there was a leak somewhere up by the church, about 2 Kms to the East of us, and he was opening all the stopcocks between us and there; I have no idea why. This time it may not be quite so easy to repair, and the water may be running for some while. Luckily we're not paying for it. It is still running, and it'll be a while before it can be mended (a week?).

Totally unrelated to the water man and his stopcocks, we then found that our own water meter up at the barn was slightly leaking. There was a plumber working nearby, who promised to have a look. He fixed the leak with a couple of turns of a large spanner, and all was done free of charge.

Then, as if all that wasn't enough, our Charpentier turned up for the first time for over a week. He had his second vaccine jab on the same day as us (June 23rd), and has been suffering ever since. We had Astra-Zeneca with no problems; he had Moderna, and felt like death for a week. He should be back at work today; I hope so.