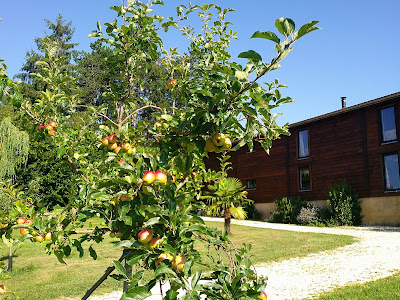 I would suggest that the humble Apple is the National Fruit of England; the Bramley and the Cox being the two main favourites.
Where would we be without Apple pie, Apple turnovers, Apple sauce, or even baked Apples?
Pears and Plums come a close second in the popularity stakes, but, also as a very big Cider drinking country, it has to be the Apple at No 1.
One of the first things I did with both our own house, and the barn, was to plant fruit trees; mostly Apples. There is nothing nicer than walking through an orchard at the bottom of the garden, with the trees full of fruit.
Back in the UK, at my people's home in Shropshire, they had a 44 tree orchard; mostly of very rare varieties. Sadly, the plonker I sold the house to had racehorses and a helicopter, and the first thing he did was to pull the whole bloody lot out!!!! I wouldn't have sold to him had I known his intentions.
Lady Magnon is a World Champion Tarte Tatin maker (well she would be if they held a competition), so the growing, preserving, and eating of Apples is quite important to us. We have 6 Apple trees, all of different varieties; from the tastiest to the bland. All have their uses, and I wouldn't wish to be without any single of them.
Posted by Cro Magnon at 06:44