Just a few days ago, on, I believe, July 1st, three statues were toppled in Canada. One of Queen Victoria, another of Queen Elizabeth II, and a third of Captain James Cook.
Between 1860 and 1970, around 150,000 indigenous children were taken from their families and sent to boarding schools, in order to educate and assimilate. The scheme was run by both Christian Churches, and the Canadian government; nothing at all to do with UK royalty past or present, or even great navigators. About 600 of these children are thought to have died within these institutions; from what, I have no idea.
No-one would sanction such programmes these days, and there is general consensus that such institutions were ill-advised 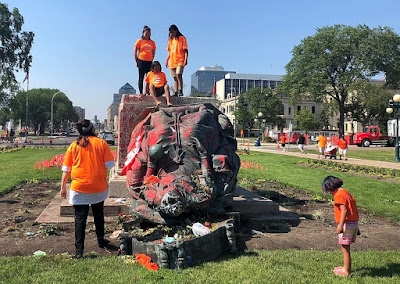 There is a trend to topple statues at the moment; almost regardless of why or wherefore. Angry adolescents aim their venom at whatever 'authority' is to hand, rather than looking for the true culprits.
In this particular case, why were Catholic/Protestant churches not targeted; or why were government buildings not daubed with paint? THEY were the guilty ones! The British monarchy is non-political.
No forces of order seemed to be in attendance whilst the vandalism took place.
I just hope that when these people achieve their aim of anarchy, that they find the result better than what they destroyed. Somehow I think that they'll create a system that is far less liberal, than that which allowed them to destroy.
A very sad day for the reputation of Canada, and even more so for those who wilfully destroyed the three beautiful statues. What on earth are those orange-clad children thinking?
Posted by Cro Magnon at 04:37