Best Days of your Life.

Of course one's school days bring back great memories, but I would suggest that for most people the title above relates more to their University/College days.
I'd spent four years living in London before I decided to go to College. I'd met loads of interesting people, and a few nasty ones, in London, but it was at College where I met those who were to become my lifelong friends; and one even became my 'spouse'.
One of my best friends was T (below sparring with Cro in college days), who, back in 2001, moved to this area, then later to a nearby barn conversion in our tiny hamlet, after a life designing futuristic buildings in Dubai. 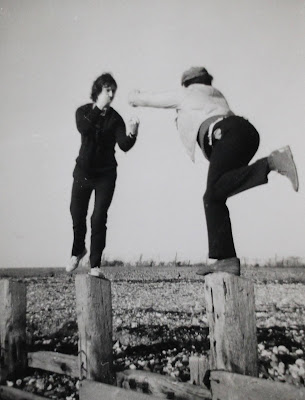 Poor T eventually became quite ill, and returned to England. Here he is (below) at his new home in Surrey, still wearing his favourite flat cap, working on collages in his model-car bedecked studio. 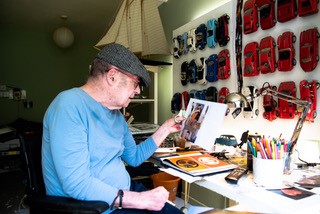 We met on our Foundation Course, and, along with another friend P, formed a trio of really good mates. We were all three very similar in many ways, we came from the same type of backgrounds, had received the same type of schooling, and had left our entry to Art College until we'd gained some knowledge of life post-school. Most of the student's were straight out of kindergarten, and seemed to us as if they were still wearing Pampers.
We (of course) planned to rule the world in our own particular disciplines.
After that year, we all went off in different directions to do our degree courses, and rather lost contact. We sent Christmas greetings, very occasionally met up, but by being spread out around the world, it wasn't easy to remain close. It was therefore very exciting when T showed interest in coming to live here; eventually about 300 metres away! Sadly his illness soon overcame him.
P became the senior partner in his own London Graphic Design Co, T designed some of Dubia's most iconic buildings, and Cro painted pictures and grew vegetables in S W France.
Posted by Cro Magnon at 08:49