Landscape Architect, Sarah Ewbank, has recently shown pictures (below) of how she imagines Stonehenge might once have looked. She pictures a wooden roof structure resting on the stone pillars, which might then have been covered in thatch.
All sorts of theories about Stonehenge have been put forward over the centuries, but her idea that it was simply a large meeting house is one of the more sensible. Its uses could have been various; a parliament, court, temple, crematorium, show ground, wedding centre, or general meeting house. Who knows! 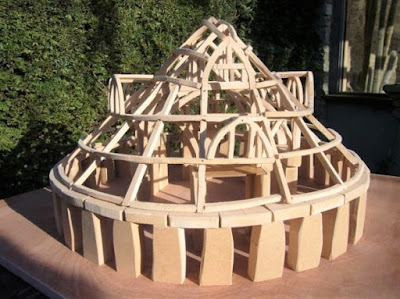 Ms Ewbank claims that academics refuse to discuss her theory, and that doesn't surprise me.  Complex 'astronomical calculator' theories are far more the realm of Oxbridge professors. Those who had worked hard for their MA's or PhD's would never admit that it had simply been an early version of London's Greenwich O2 arena.
Occasionally life IS simple, and as hard as one might try to look for complex answers to simple questions, it's always best to investigate all aspects, from the very basic to the most compounded. One should always ask 'What would those people, all those years ago, really have wanted, or needed?'.
I have a funny feeling that Ms Ewbank is right. Some of the more 'scientific' or 'mumbo-jumbo' theories really are far-fetched.
Stonehenge is estimated to have been built around 5,000 years ago. This possibly similar structure, (below), in my nearby village, was built in 1270. Stone supports, wooden roof structure, tiles instead of thatch, and used for all purposes. It does sound very similar.
There are, of course, plenty of unanswered questions about Stonehenge, but I'm sure Ms Ewbank has many of them right. 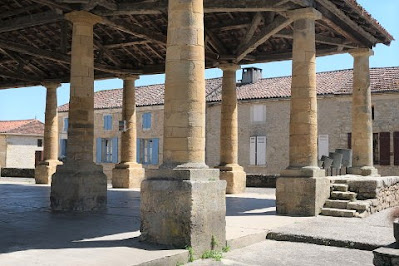