I was at my local Leclerc supermarket yesterday morning, and, as all Tour de France aficionados will know, they are sponsoring the red polka dot 'king of the mountains' jersey this year.
At the checkout I was given a long red spotted box, which proved to contain what you see below; a map of France for colouring in, complete with a small pack of crayons. 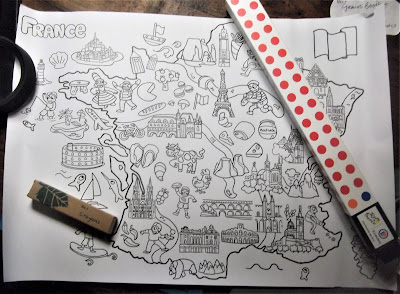 I was a little surprised that the map was unrelated to the Tour itself; I would have preferred that it followed the route in some way.
It says on the box that the map was made in China, and is for those above 3 years old. There are 4 colours in the tiny box; green, blue, yellow, and red, all also made in China. 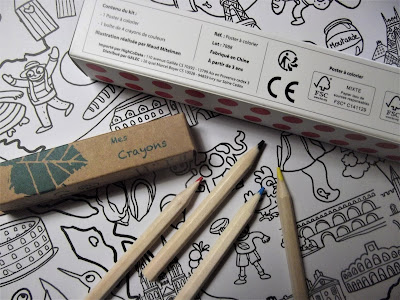 I was also given two scratch cards. The first one was no good, but the second one said that I'd won a Tour de France game, which I will claim next Tuesday.
Don't ever say that life isn't anything but exciting here in France. A surprise around every corner.
Now, where are those crayons?
Regarding the Tour itself; what an amazing finish yesterday. Well done Cav.
p.s. Well done also to England Footballers. What punishment is being planned by both France and Germany, we shall soon see. Macron and Merkel must be FURIOUS!
Posted by Cro Magnon at 04:22