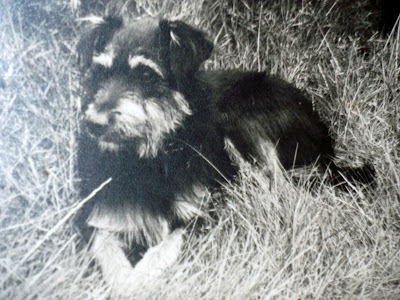 In the Autumn, when there were mushrooms about, Hamlet would refuse to accompany me on my forays. He simply would not leave his basket.

Usually about half an hour later, when I was semi-lost deep in woodland, he would suddenly turn up, shouting 'I've found you, I've found you'. He'd have a biscuit as a reward, as I told him what a clever boy he was, and we'd carry on as if he'd been with me all the while.

Like most of us Hamlet was a creature of habit, and one of his habits only became known to me after he'd died. Most mornings he would go off by himself, I'd always presumed he was just wandering about visiting friends. In fact I later learned that every morning he would go up the road to my neighbour's farm and steal two newly laid eggs from the chicken house for his breakfast. The strange thing was that they didn't really seem to mind.

Hamlet was always known as Omelet by these neighbours; reasonably apt in the circumstances.

He was a lovely dog. He also used to bite me quite a lot.