Memories: The House That Father Built. 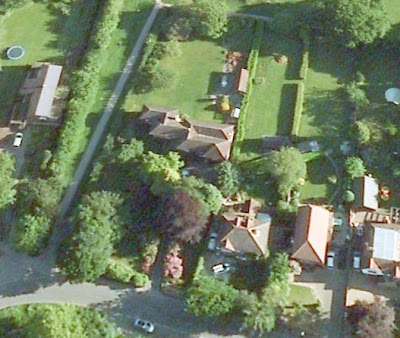 The multi-roofed house in the middle-ish of the above picture is where the young Cro spent much of his formative years; roughly from the age of about 4 to 14.

Unlike the other houses in the road, ours was built in the middle of the garden; set well back from the road. Much more sensible.

My father designed the house on the back of an envelope, then called in a local architect (a Mrs Swann) to draw it up with straight lines, etc. I think the house was eventually built circa 1950. I do actually remember the building stage; I remember the scaffolding, and piercing my knee with a very large misplaced nail (I still have the huge scar).

In our day there were chickens, bantams, ducks, and geese at the far end of the garden. There was a good sized vegetable garden, a small hazel-nut orchard, and plenty of fruit trees dotted around; I notice that all this has now gone. It was very much a post-war home, where 'Digging for Victory' was still practised (albeit by our gardener, Fuller).

The house itself has been added-on-to a bit recently, and some of father's adherence to classic local design has been lost; but it still feels like 'home' to me, and (in my eyes) still a beautiful place to live. 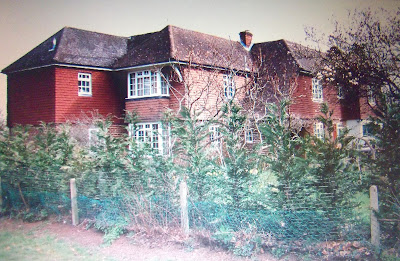 I've had to boot-up an ancient computer to find this photo. I also had to photograph the image on-screen; hence the bad quality. This picture was taken from the pathway on the left of the house in the top picture.

When I look back at my time spent in Lingfield, I realise why I do so many of the things I now do myself; the life-style it offered was certainly worth copying. I wonder if any of my own children will end-up reflecting the life-style of their early years spent here in France?

Father never built another house; one was enough.