They Stoup to Concur. A Sunday Special. 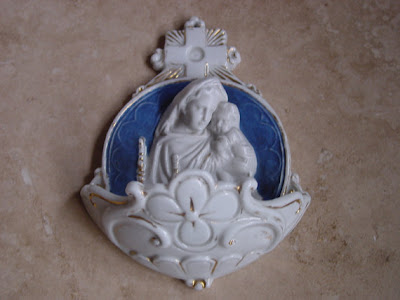 As a confirmed atheist, I find this one of the church's most bizarre of rituals.

I can almost understand why certain 'god-fearing' (or probably 'devil-fearing') people would take part in mock-cannibalistic, flesh eating and blood drinking, ceremonies. The Protestant religion is inextricably linked to death, human sacrifice, stigmata, etc, and to remove these elements would be fatal to their core beliefs. But having a small container of 'magic water' in one's own home (as so many Catholic families do) I find truly bizarre.

I see it thus. Some bloke, probably wearing a seriously embroidered frock, and quite a lot of jewellery, waves his hands over some tap water, which is then taken home by the credulous and poured into a water-stoup that is festooned with some imaginary likeness of Mary the 'virgin' (rather like the one above). This water is then used in ritualistic facial, or chest, daubing, to ward off evil spirits, help win the lottery, or just as a knee-jerk reaction to people like moi..... and all this IN SOPHISTICATED EUROPE!

One can but wonder if water-stoup adherents ever actually sit back and ask themselves what the hell they think they're doing. One can only presume THEY DON'T.... It's water.... just plain bloody water!

I have a real fascination for these old water stoups, and I find them very beautiful in their simplicity. They turn up regularly at our local boot sales, and I'm seriously thinking of starting a collection. Primitive; or what!