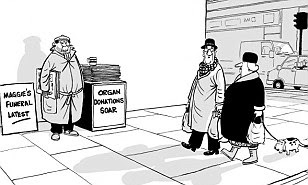 "If only she could've donated some of her guts and determination to today's politicians". Mac.


I don't want to praise Lady Thatcher unconditionally, because there are certain things she did that I didn't agree with, but the low-life scum who have been celebrating her death are a disgusting bunch, and they need to be answered. They are the committed communists, the ignorant gullible, and the just-plain-stupid, and one really wonders if they know anything at all of her time as Prime Minister.

There is nothing the extreme left hate more than success from the right; and Mrs Thatcher was undoubtedly the most successful, and admired, Prime Minister of the 20th Century.

People conveniently forget that when she took power in 1979, the country was suffering from high unemployment and ongoing recession due to the irresponsible 'Tax and Spend' policies of the previous Labour government; the country was on its knees. Britain had become known as 'The Sick Man of Europe', and to counteract this her priorities were deregulation, a more flexible labour market, and a reduction of the power of the hard-left trade unions. All her policies were successful, and Britain returned to stability and growth by 1982. 'Wealth' suddenly became an option, and the results were famously parodied by the 'loads-a-money' character played by comedian Harry Enfield. Anyone who wished to succeed in life, was given every opportunity. However, if I agree with any of the rants against Lady Thatcher, it's that she probably created TOO MUCH wealth, and not enough subsequent regulation.

Perhaps the most dramatic event of her leadership was Arthur Scargill's miner's strike; a strike from which certain communities have still not recovered.

On the 6th March 1984, the UK's 'National Coal Board' announced to the government that it wished to close 20 uneconomic coal mines. An enquiry was held, and the go-ahead was given for the closure of 13. As a result, the Communist leader of the National Miners Union, Arthur Scargill, called his men out on strike and it soon developed into a violent national disaster that not only saw the deaths of 6 men, but also heralded the demise of the Coal Industry.

In 1983 (prior to the strike) there had been 174 working coal mines in the UK (Harold Wilson had already closed 200); the majority of which were viable. Today there are JUST 6. But not only did the strike destroy Britain's coal industry, it also had a devastating effect on engineering, the railways, electricity production, and steel production, all of which were inextricably linked to the coal industry. Traditional 'metal bashing' in The Midlands has now all but disappeared, and those industries that did survive were obliged to change their power source from coal to electricity. The strike achieved nothing but unemployment, the coalfields were devastated, and those ever-eager Communist Union leaders are now all living on fat pensions.

The miners themselves, from those dozen pits that were destined for closure, obviously had genuine concerns, but they could never have foreseen the disastrous results of their union's politically led strike action. But good did come of the conflict, in that 'Flying Pickets' and the intimidation of workers, are both now illegal, and pre-strike ballots are compulsory. It is a strange twist of fate that had these laws been put in place by the previous Conservative government, under the weak Ted Heath, the miners could have saved much of their own industry.

During the time of the miner's strike, I occasionally worked with John Biffin. John was Leader of the House of Commons 82-87, Lord Privy Seal 83-87, and Chief Secretary to the Treasury (amongst other things). I remember over lunch, one day, he said that Lady Thatcher's greatest disappointment was the hypnotic power that Scargill had over his gullible men, and the disastrous results of the strike on the country's once great coalfields. The 'enemy within' had been defeated, but it had left terrible destruction in its wake. Scargill had almost won his political gamble; but far too many of his union members had lost everything!

Lady Thatcher's other 'moment of glory' was of course The Falklands War. This really rather pointless war, instigated by the highly unpopular General Galtieri, saw the deaths of 907 Argentinians, and 255 British. Britain re-took control of the islands on 14 June 1982 when after two months of fighting, Brig Gen Mario Menendez surrendered. It was said at the time that the Argentinians should have invaded under a socialist government (who would probably have done nothing) rather than mess with the Iron Lady. Galtieri was later tried for human rights violations and was sentenced to 12 year imprisonment.

In 2000 a poll was taken amongst all the worlds political leaders (both left and right) as to who was the most important and influential world leader of the 20th Century. The result was obvious; they voted for Lady Thatcher.

The foul-mouthed partying detractors of Lady Thatcher (Glenda Jackson, Galloway, Bragg, Mad-Morrissey, etc) will fade into obscurity (where they belong); Lady Thatcher's name will, without question, survive even the worst of their verbal diarrhoea. She was not everyone's cup of tea, but will always be highly regarded by the law-abiding, hard working, and decent people of Britain, and the rest of the world.