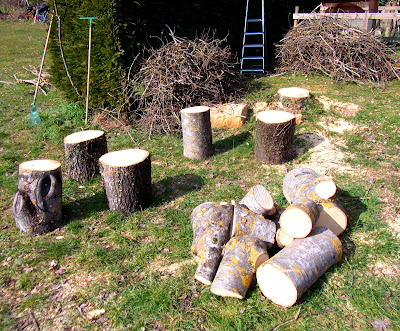 I've just recently felled this Aspen. It was dying from the top, and, like all Aspens, was also throwing up suckers to a radius of about 25 miles; it HAD to come down. Aspens also have this annoying habit of producing catkins that end-up depositing a thick cottony, snow-like, carpet beneath the tree each Spring.

My original intention was to replant with a Weeping Willow, but I've now been told that there's an illness around that kills them off once they reach about 12 ft high; I've even lost one myself several years ago.

So I've now plumped for a Catalpa. You may remember that I recently found, and brought home, several small trees from the woods; one of which (the biggest) will now replace the Aspen. They become magnificent trees, and as far as I know have no bad habits other than harbouring certain harmless caterpillars.

This (below) is how I imagine it will be in a couple of year's time. 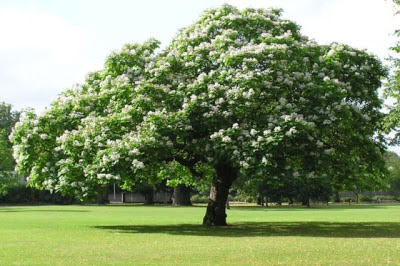