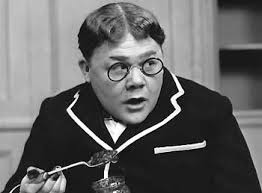 Those of us with enough years under our belts will fondly remember Gerald Campion as Billy Bunty; the obese boy from Greyfriars School, who was always either eating or attempting to steal something to eat.

My family were late-comers to TV, but I do remember seeing the Bunter programmes at a friend's house. He and his friends weren't unlike my own school friends; but I don't think we had an equivalent of Bunter himself.

I loved Bunter, and it's amazing how many of his classmates are now household names. Amongst those schoolboy actors in the original TV series were Anthony Valentine, Michael Crawford, Ron Moody, the wonderful Sam Kydd, and David Hemmings. All of whom, I imagine, were experiencing their first TV roles at Greyfriars.

After his acting career came to an end, Campion ran a series of well known clubs and restaurants in and around London's West End, where his hospitality was legendary.

Campion was also a real-life gourmet, and he retired to Agen in S W France, not far from where I live; which is where he died in 2002 aged 81.

I say, you fellows; anyone got some cake?