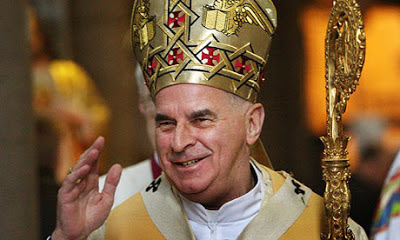 I recently posted an irreverent (but I hope, amusing) piece about replacing Benny the Pope.

I received just ONE angry-ish comment from a Pope admirer (Semi-anonymous Lizzie), who accused me of Pope bashing. She also suggested that a Million adherents can't be wrong (wrong about what, she didn't say).

My muted reply to her was that I had nothing against ordinary Catholics per se, but that the Catholic hierarchy are...erm... well, not always nice.  I never like to overstate the obvious.

I'm not going to embarrass Mr O'Brien (above); he's managed that all by himself, but I'm just posting his picture here for 'Semi-anonymous Lizzie'. It shows him wearing a nice hat, and holding a nice stick thingy, whilst waving to his nice adoring fans.

What WOULD we do for fun, without the Catholic priesthood!

Suggestions on Keith's private thoughts (in the above picture) would be welcomed. No prizes.

Nota Bene: Just in case anyone doesn't know about Cardinal Keith O'Brien (the top Catholic in the UK).... he's just admitted to having been a very naughty boy; and (like Benny) he's resigned. He's been told by his bosses that he MUST now go off and live as a hermit; I'm not surprised, as the cops are after him anyway.... C'est la Catholic vie!