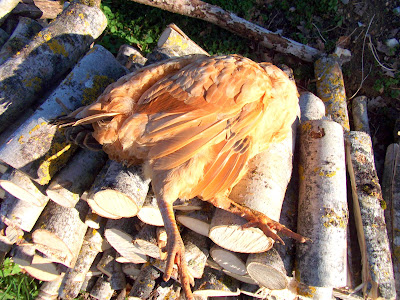 If you think you've already read this over at John's; well it's just that occasionally subjects unite.

Anyone who keeps animals must be prepared for losses, and yesterday morning one happened.

Edwina (named, of course, after the UK's Edwina Currie) had been unwell for about two weeks. Her beautiful red comb had turned purple, and her breathing had become laboured. She was suffering from heart failure; a common ailment amongst hens.

We decided not to end her life ourselves, but to leave it to nature, as we could see no sign of her actually suffering.

Richard and Richard, our two remaining hens, have definitely been the 'layers' of the trio, so our egg crop will not be affected. However, Edwina was certainly 'Top Hen', and ruled harshly over her all female roost.

So, the Sandalwood awaits, and this morning she will be given a good send-off.