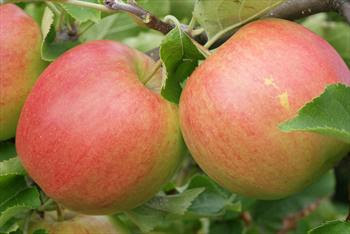 I've been looking out for a Golden Delicious apple tree at my local DIY/Gardening store, but they've either sold out, or have given up selling them. So I've plumped for, what I believe to be, the next best thing; a 'Jonagold'.

Jonagold is a 1953, American produced, cross between the Jonathan and the Golden delicious apple, and has (I'm assured) conserved the best of both varieties.

An orchard should not only contain one's absolute favourite apples, it should also represent a broad variety of early/late eaters, cookers, and juicers. The fun of having plenty of apple trees is knowing that at least one or two will probably do well each year; although nothing (except figs) is safe here from late frosts.

I think I'll also plant another two varieties of cherry this year. I'd like to end up like my friend José, who has three huge trees that fruit in succession over a period of about 8 weeks. Wonderful.

My photo of the newly planted Jonagold was rubbish, so I've borrowed one (of its fruit) from Mr Google.

Anyone else out there have a Jonagold? Your opinion would be appreciated.