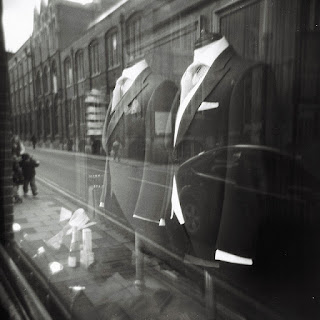 When my late father worked in The City, he took a couple of rooms in Milk Street; just off Cheapside, up towards St Pauls Cathedral. Milk Street led into the tiny Russia Row, where he discovered a wonderful tailor; Sol Hyams.

Hyams was one of those real old fashioned Jewish tailor shops. A complete jumble to the untrained eye, they'd have you measured and suited in a matter of days. Day one measurements, day two fitting, day three you paid your bill and took away your suit. It was a no-nonsense business, and they took huge pride in their work. During his whole life, my father never had his suits made elsewhere.

When my own time came to work in The City, my father advised me to visit Hyams, and generously said he'd pick up the tab.

I turned-up unannounced, and old Mr Hyams immediately began to take my details and measurements. He asked where I was working and what was my job description (I was a stockbroker's blue button). He suggested a heavy pin-stripe, a slightly waisted jacket, and two pairs of trousers (as I'd be spending much of my time sitting down). I don't think he even once asked my own opinion.

He chatted about my father, threw huge bolts of material onto the enormous cutting table, and went through illustrated books. Eventually HE decided exactly what I wanted; he showed me a picture which I think he described as a 'Guards Officer' cut, with sloping jacket pockets, and slightly sloping trouser bottoms. It was single breasted, with a double vent, and a pinched waist. I thanked him, and arranged for my fitting in a couple of days time.

When I returned, the suit was waiting. It was all stitches and brown paper, and looked a complete mess. I tried it on, and after a couple of slight alterations I was told to pick it up the following day.

Hyams certainly wasn't Savile Row, their main business was the mass-production of cheap men's fashion suits. Their premises was filled with pale grey Duke of Windsor pattern, bum-freezer, Mod suits, that would have looked more at home on the back of a Lambretta, than in a City tailors; they were churning them out by the thousand, and they all hung in plastic bags from a primitive type of ceiling conveyor belt.

My suit was perfect, and it lasted for years; but unlike my father, I never went back for more. I wonder how many other 'private clients' they had; I imagine not very many.

I doubt if Hyams is still there, but oh how I'd love to go back again; just as a tourist.