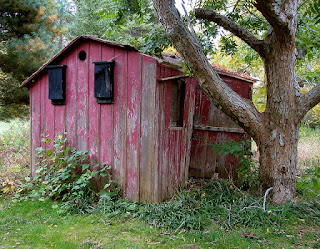 Between Farnham and Guildford, in England's finest county of Surrey, lies 'The Hog's Back'.

The Hog's Back is a ridge of the North Downs (in England, downs go up), and is sometimes also known as the A31.

When I was a student in Farnham, my mother told me of a distant relative who lived just off this road, and suggested I visit him.

The relative in question was a Graphic Designer for The Church of England (he produced those posters you see outside churches), and he'd moved into his Hog's Back house, with wife and kids, just a couple of years previously.

The house had been abandoned, and he'd bought it almost as a ruin. It needed extensive work, and the garden (jungle) was totally overgrown. He spent several months just making the house habitable.

When the house itself was done, they attacked the garden. There were trees to be felled, rubbish to be cleared, and plans to be made. The more they cleared, the more it stretched much further down than they'd at first imagined. Right at the bottom there was a thick patch of Rhododendrons, where they also found what looked like a regularly used path leading to a ramshackle shed.

They could see at once that the shed was inhabited, and it wasn't long before the occupier returned and they introduced themselves.

The elderly gentleman (let's call him Jim) was a classic tramp. He owned just a few simple possessions, and all he wanted was a quiet life. They left him alone to consider their options.

Jim was hurting no-one. The children befriended him, and he soon started to do small jobs in and around the garden. During one hard winter he was eventually invited to live in the house; which he did.

On the only occasion I visited this distant relative, there was 'Uncle Jim' looking like any normal father-in-law or grandfather, happily ensconced in family life, and playing with the children.

No doubt he stayed with the family for the rest of his life.


I remember posting a picture, sometime back, of an unfortunate man (here in France) who owned no more than an old Volvo, his Alsatian dog Rex, and a white plastic garden chair. His love of Alsatians had led him to meet my neighbours Claude and Josette, and they had become friends. This was about 4 years ago.

Maurice and Rex now live in a battered old caravan, amongst piles of rotting farm machinery, inside an old tumble-down barn. He was supposed to have moved-on last Autumn, but Claude and Josette took pity on him, and it looks like he's there to stay. He does bits around the farm (not unlike Uncle Jim), and is a burden to no-one. I chat with him occasionally, and he has slowly become part of our local scene.

I've recently noticed that he now has electricity connected, as well as satellite TV. I imagine he'll be there for the rest of his life.

I should add that Claude and Josette also recently took-in a sick neighbour, Hervé (who had lived alone). They looked after him until he finally died; he was with them for about 3 years.

There are still good and generous people about, as well as (unfortunately) those who need their help.