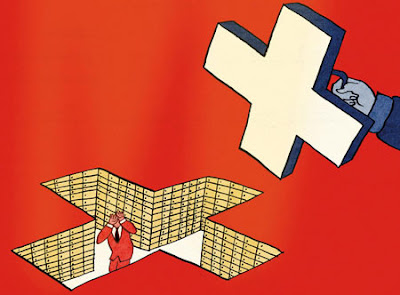 I was listening to an interview with writer Anthony Horowitz on the radio last night. Fast-talking Horowitz is the writer of TV's Midsomer Murders and Foyle's War, amongst other things.

At the end of the interview he mentioned that his late father had, not long before he died, deposited a large amount of money in a Swiss bank account (or maybe it was Cyprus); but had omitted to give the family any details. This reminded me of my own father; but not of the same important sum of money.

Back in the 1960's the British government imposed certain 'Exchange Control Regulations'; in effect, an annoying limit on how much money one could take abroad when on holiday.... I think the limit was £60 in any foreign currency.

During this period of unnecessary deprivation, my people had stayed for a while at the Aga Khan's famous Hotel Romazzino on Sardinia's Costa Smeralda (Princess Margaret was amongst the fellow guests), where a single night's stay was then about £60; so the problems of 'Exchange Control' were immediately obvious.

To cope with such petty bureaucracy, father decided that he needed a foreign, secretive (ahem), bank account, and when next in Andorra he deposited an emergency amount of cash with the small Principality's National Bank. Having mentioned this to me, he subsequently forgot all about it, and the money remained untouched; earning a small amount of interest each year.

Not long before he died we were watching some TV programme about Andorra, and he suddenly remembered his bank account. I was instantly instructed to write to them (including his UK bank account details), in order for them to close his account, and refund his deposit. After about a month or so a correct-looking sum of money (from said bank) appeared on his regular statement, and all was resolved.

But, having listened to Horowitz's tale of his own father's folly, I wondered how many bank deposits there must be, in far away places (or even in the UK), which remain unclaimed. I imagine there is some 'Statute of Limitations' on such accounts, and the bankers presumably become rich on their contents. Easy money!

Had my father and I not watched that particular TV programme, his unclaimed dosh would be there to this day. Phew!