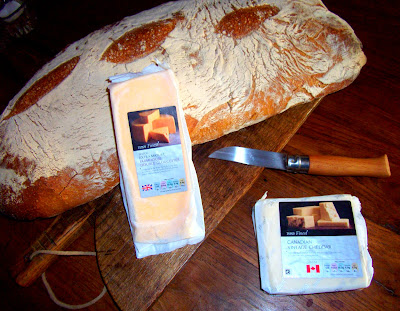 My oldest son, Kimbo, is a wonderful chap. He knows exactly what to bring over from Blighty for his Papa when he visits. Some tasty little tit-bit, speciality, or difficult to find ingredient, is always revealed on arrival.

On his last visit he brought cheese. Some Extra Mature Double Gloucester, some Canadian Vintage Cheddar, and another (that I can't remember) which we ate whilst he was here (all from Tesco).

I've said before that out of the (roughly) 365 cheeses that are produced here in France, very few come anywhere near the standard of a good mature English or Canadian Cheddar.

One really would have thought that with so many wonderful cheeses just north of the Channel, that they would take advantage. But no; I have to rely on my son for the occasional treat.

Only once have I found Cheddar in a French supermarket. It was labelled 'Seriously Tasty Cheddar', but it wasn't; it was bland. But then with a name like that, what would you expect. Sadly, if that was a Frenchman's only experience of English cheese, then it's not surprising that they're not clambering for more!