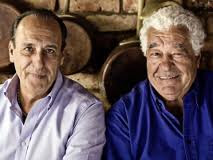 I've never made a secret of the fact that I'm a bit of a foodie.

TV chefs come and go. Some are screaming hyperactive loonies, some are busty sex Goddesses  and some you really wouldn't want to fry an egg for you.

These two above are not really 'TV chefs'; they are more 'food enthusiasts', and their recent re-run of 'Two Hungry Italians' on the UK's BBC 2 (unfortunately at a silly time in the afternoon), was an absolute delight. Later series were called 'Two Greedy Italians', and 'Still Hungry'.

Gennaro Contaldo (left) and Antonio Carluccio (right) are Italians who have decided to make England their home, but their enthusiasm for everything Italian (especially food) remains infectious.

The recent programmes followed them around the Italy of their childhoods, as they remembered times past through places and plates. They cooked simple country dishes, chatted with simple country folk, and reminisced (often with tears in their eyes) about all that they'd left behind.

They are both extremely likeable characters, and their love for their homeland (and each other) is touching. If their programme turns up where you live, or you should find a DVD, I recommend them wholeheartedly.

One thing did come across from their programmes, however; that you definitely get much better Italian cuisine in London or New York than you do in Italy. Rather like Indian, Chinese, and probably even French.