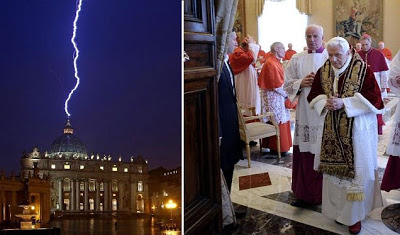 So, old Benny's thrown in the towel. He's had enough!

His boss was so furious on hearing of his resignation, that he threw a bloody great lightning bolt at The Vatican. Oy vey!!!!

The question now is; who will replace him. The job criteria is a bit dodgy, and quite varied; the new boy mustn't be married, must pretend to believe in fairies, and be prepared to live in absolute luxury whilst 'giving succour to the poor'.

Otherwise he should expect to undertake a lot of world travel, spend a lot of time in church, and he (and it must be a he) should show a penchant for heavily embroidered dresses (ahem).

I do like the sound of becoming Pope Cro, but frankly I don't think I qualify on any count (I'm certainly not prepared to wear a frock!).