A Belated Apology to D. 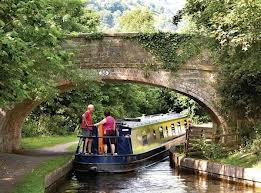 D was one of those rather pompous men who permanently wore a navy blazer, with a regimental badge sewn onto the breast pocket; he must have been about 60.

He was a minor manager in a factory that made milking machines, and was what one might call 'locally respected'.

I was in my village pub one evening when he proudly stated that he had been born, and still lived, in the same small Shropshire town (E), and that his earliest memory was of looking out of his tiny bedroom window at the boats sailing up and down The Shropshire Union Canal.

This puzzled me, and I said 'Well, if you were born in E, you wouldn't have looked out on The Shropshire Union Canal'.

'So, you think you know better do you!' he snapped back at me.

'Well I do know that The Shropshire Union Canal doesn't run through E' I replied. 'Even though I've only lived in the area for a year or so'.

At this D laughed, looked at me as if I was an idiot, and reached into his inside pocket, ostentatiously drawing out his wallet. He slapped a £10 note on the bar, and challenged me to a wager; saying 'This'll be the easiest tenner I've earned in my life'.

I reluctantly met his £10 note, and he called to Fred, the publican, for his small book on local canals.

He panned through the pages until he came to the town of E, then suddenly stood bolt upright and turned a nasty pale grey colour as the blood drained into his polished brown brogues.

'What does it say?' asked the eager crowd gathered around him.

'I can tell you what it says' I said rather guiltily; slipping the two £10 notes into my pocket. 'It says it's called The Llangollen Canal'.

Poor D had been made to look a complete fool, and I immediately regretted what I'd done. He looked as if his whole life had been rubbished, and by the young whipper-snapper from 'the big house' as well.

He didn't come to our village pub much after that evening, but when he did occasionally make an appearance, he always referred to me bitterly as 'Mr Know-it-All'.

Oh how I wish I'd been wrong that evening. I'd have paid over the odds to have saved him from the awful shame he suffered. But then; he really should have known better!