BB and the Beau. 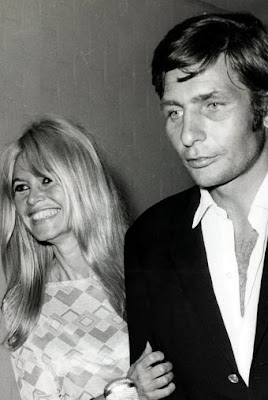 Seeing as I'm out of action for a couple of days... I got to reminiscing!

In 1966 I was dealing in antiques in London's Chelsea. My partnership with Justin de Villeneuve (Nigel Davies) had just ended, and I'd set-up on my own dealing in early European polychromed wood carvings; mostly ancient religious artefacts. Justin was just too busy establishing little Twiggy as a model, to bother with antiques.

It was late Summer, and Brigitte Bardot had just recently married Gunter Sachs. Unbeknown to me, and probably to everyone else, they were spending part of their honeymoon in London.

I remember looking around and seeing her holding some rather nice piece, and saying something like 'zees iz booty-fool';... and that was the extent of our encounter.

But more interesting (at least, it was to me), was that Herr Sachs was wandering about by himself, totally indifferent to his new bride, whilst BB herself was accompanied, VERY attentively, by her magnificently attired chauffeur.

BB, of course, looked stunning, but her chauffeur stole the show. He was tall, very tanned, extremely handsome, and kitted-out in a black uniform with gold buttons. Black chauffeur's hat, jacket buttoned to the neck, jodhpurs, and knee length leather boots; all impeccable and very impressive; I'm sure you can picture the style.

Had someone asked me which (between the two men) was her 'beau', I would have definitely picked the chauffeur.

Her marriage to Sachs only lasted a couple of years.... I wonder why?