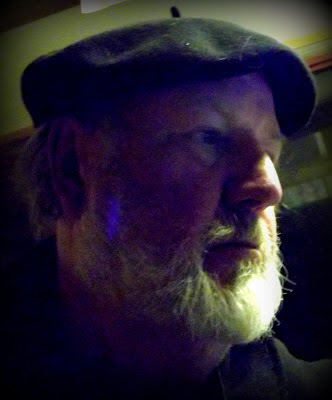 After the dog ate my 'ratting' beret (see here) I was forced to employ alternatives.

I first started wearing berets way back when I was about 18. I seem to remember that my first one was grey, and I originally considered them less likely to blow away in strong winds than a 'peaked' or 'brimmed' hat; I was probably wrong.

I have experimented with other forms of head-gear, and did once own a wonderful brown Harris Tweed peaked cap. But I stupidly lent it to a pretty Parisian girl and that was the last I saw of it; a bereavement of sorts. Proof that a pretty face can bring Cro to his knees!

When Bok ate my beret I was almost in shock. A hat that one wears EVERY DAY becomes a part of you; it becomes that 'old friend'.

So, on finding the remains, I was forced to revert to my slightly smarter weekday beret, and my Sunday best beret. Above is the Sunday; my weekday must have been otherwise engaged. The portrait photo, above, is by Charles Fenton-Savage; it makes me look ancient, but I rather like it.

Of course I can't speak of berets without mentioning my all-time-hero beard/beret combo wearer; the wonderful Abbé Pierre (below). 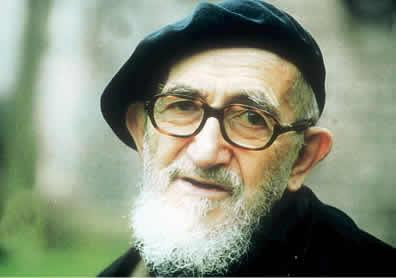 I think this must have been his Sunday beret too!

I draw NO comparisons between Cro and the Abbé Pierre, other than our penchant for floppy hats.

Nota Bene: Anyone who does not know of L'Abbé Pierre might read his 1954 'Uprising of kindness' speech. It's well worth 2 minutes of anyone's time.