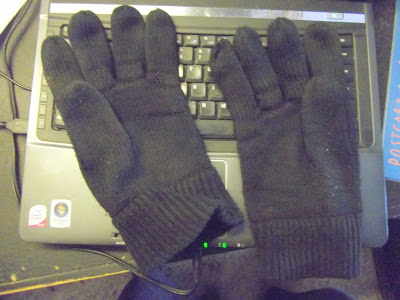 It's been freezing here lately, and we've even had our second load of snow; albeit very little.

So it's been out with the scarf and gloves again, only I have a problem. My gloves (above) don't seem to make any difference to the warmth of my hands. I suspect they're made of some synthetic material (probably a horse derivative), that does not have any insulation properties.

But it's not only in the glove department where such things happen. I once bought a hammer who's head came off on its very first nail-whack, I was once given a cheap 'slinky' that didn't 'slink', and I've had a series of stone drill-bits with 'Tungsten' tips that just melted away. There have been plenty of other examples.

So it makes me wonder why certain manufacturers (probably mostly in China or Taiwan) even bother to make such things. Wouldn't it be so much simpler to do the job properly, charge a bit more for the product, and avoid all the bloody client anger.

Of course it's also up to the buyer; a bargain is not always what it seems, especially when it comes to gloves.