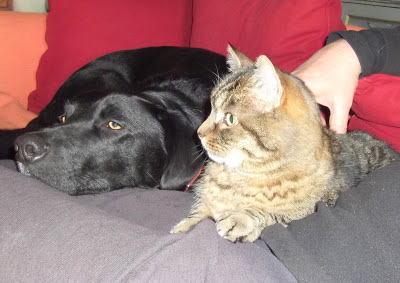 Freddie (the cat) has always been a bit wary of the dogs. He knows he was here first, and considers their arrival as newcomer-intrusion.

So, over the last few months, I've been 'training' him to accept them as fellow-four-footers.

Monty now licks him vigorously, and Bok just sniffs his bum. They are, at last, coming to some sort of truce.

If I introduced a kitten into the fold, I'm certain it would end up sleeping amongst the dogs, but as Freddie is the oldest, he just does his own thing and avoids them!

I shall continue with my 'training' until they are all perfectly comfortable in each other's company..... that may take some time, but I'm confident that I'll get there.